Skip to Home Skip to Content Skip to Site Map

The Department of the Interior and Local Government (DILG) IV-A and the Manila Water Company, Inc. officially partnered through the ceremonial Memorandum of Agreement (MOA) signing last Wednesday, August 20, 2014 to formally seal the commitment in supporting the Supreme Court writ of continuing mandamus to clean and rehabilitate Manila Bay. 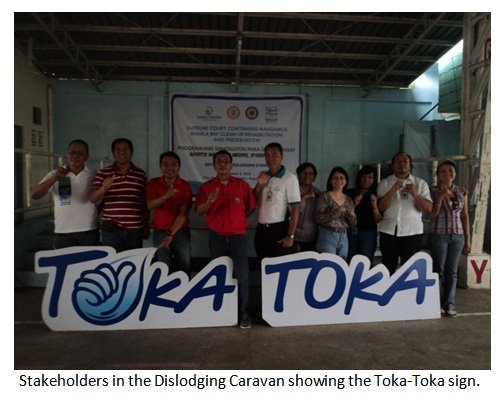 Shortly after the welcome remarks of Assistant Regional Director Ariel Iglesia, an overview of the said court order was discussed by Atty. Maria Elena Quebral, DILG IV-A Regional Attorney and Manila Bay Focal Person. According to her, the writ aims to clean up, rehabilitate and preserve Manila Bay to its SB (Swim and Bath) level.

Further discussion on what this program is about was made by Operations Group Director Mr. Geodino Carpio. He later acknowledged the DILG IV-A for its continuing support to the said program especially in making efforts in the formulation of the desludging caravan. Aside from this, he also encouraged everyone to take part and do their share.

Regional Director Josefina Castilla-Go in her closing message stated the Department’s willingness to do more and to strengthen further its partnership with TOKA-TOKA through advocacy during barangay assembly days, commitment to support DILG-Manila Water programs, major cleanup activities in Rizal and the desludging caravan. She even added, “…after all, we are aiming the same goal and objective”.